The 2nd Cisco DevNetCreate conference was recently held at the Computer History Museum in Mountain View.  Pretty cool place to see the history of technology we use on a daily basis.

This picture reminded me of a scene from the movie Sneakers.

Lots of sessions and really good food. They brought in local food trucks so we had a good variety of choices over the two day conference. The only down side, lots of really good sessions but not enough time(i.e. some ran at the same time as others).  Maybe somehow they could be recorded?? Overall, I would give this conference a 95%, hmmm, why not 100? Well, that reason is, just not enough time to see everything.  Not sure if adding another day would make this better.  I think the two days are perfect, however the recording of sessions would add that little 5% for sure.

Normally, I don’t stick around for keynotes at ANY conference. Usually I get distracted and wonder off.  BUT, this time I tried it out.  Being part of the Cisco Champions group added some fun to it, front row, center seating.

This one was pretty cool, Guy Kawasaki was invited to talk. He tells a great story! If you get a chance to see him at a conference, do not pass it up.

As for sessions, Cisco Meraki had several workshops/sessions talking about their API.  Lots of focus on Node-RED and how to make that “magic” of programming an easier process.

Michael Chenetz did a great job of doing an intro to using Node-RED and showing how things can connect with ease using the Meraki API.

Now, the next one is a bummer, it was about designing your own PCB along with using Upverter and Hackster.io.  I was actually really excited for this one. BUT, I quickly realized I don’t have the patience for it. The little circuits and what-not, nah, that’s not for me. Which was a good experience that I was able to see what someone had created and quickly found out I would really not like to do it. So in the end it worked out well, PCB design is not for me. 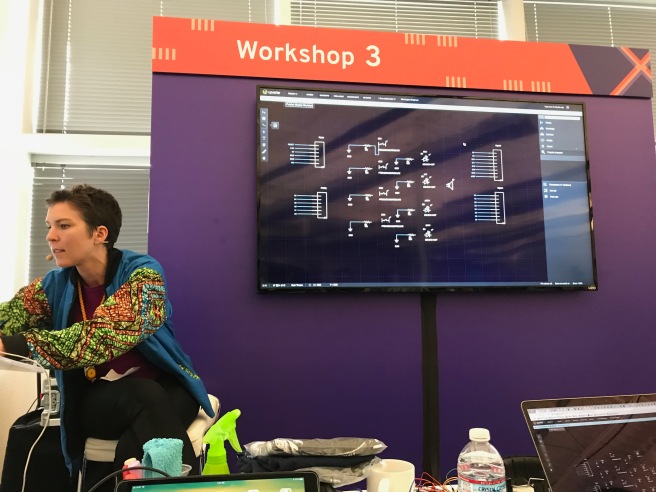 Now comes the very fun “Create” part of the conference, it was a bonfire and create your own S’mores. If you don’t know what a S’more is, well, you’re missing out … stop reading right now and make some, they go great with some beer(or wine).

Thanks to the entire DevNetCreate Team for once again, having a great conference and fun time! I hope to see you all again next year!

One thought on “Good weather and some DevNetCreate”